And so than, I was hooked. My interest in electronics sparked (bad pun) again a couple years ago, when I bought an Arduino microcontroller out of interest, than I was introduced to 3d printers by a friend, than I have started to mess around with ICs and bought a 1000 books on the subject. All these eventually led me to be fascinated about electronic sound synthesizers. Why? Erm, “dunno”, I think it is pretty cool to make sounds out of pieces of electronic components.

One of my first projects was an Atari Punk console. The original design was published in a Radio Shack booklet, the “Engineer’s Notebook: Integrated Circuit Applications” in 1980 by Forrest Mims. He simple called it “Sound Synthesizer” or “Step Tone Generator”, but most popularly it is known as Atari Punk Console because the sounds it makes, resembles of the old Atari 2600 game console. 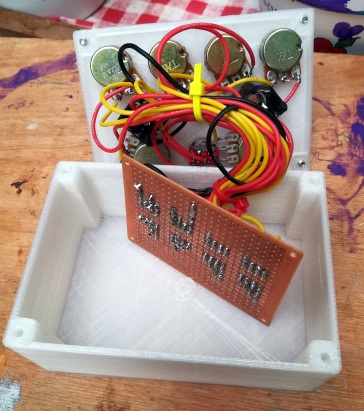 This little IC is around since the 1970`s and it is the current holder of the world record as the most numerous IC produced of all time.

The 555 is also called a “timer” or a “timing IC” as it can produce electronic signals in equal intervals. It produces a square wave (shaped) signal. The chip itself has 3 core set ups (monostable, astable, bistable) and it can be found in thousands of devices from toys to space crafts.

I will not going through in details how the IC is working, there are plenty of publications can be found online about that.

The IC is can produce a square wave shaped signal, which ultimately gives the distinctive sound it makes and which explains why it sounds like an old 8 bit game console.

In the basic Atari Punk Console, one chip is set up in “astable” mode and that drives an other 555 which set up in “monostable” mode. Alternatively, one 556 chip can be used too but the theory how the machine works is exactly the same.

Here is the schematic which I have designed, based on other DIY punk consoles can be found online. My version has 6 variable resistors (potmeters), four are which functions as filters using an other two 555s and you have the standard knobs for pitch and for tone. 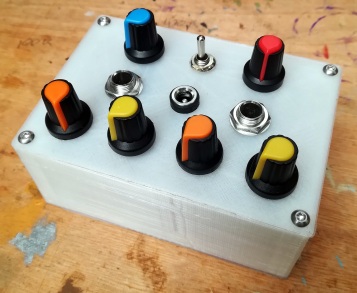 The box has an audio output. I am using 1/4 jack sockets, but you can use your own preference, like a 3.5mm or banana jacks. The audio socket can be replaced by something like an 8 ohm direct speaker, maybe with a simple little amplifier such one based on an LM386 Op-amp

There is a CV (control voltage) input, wired to an other 1/4 jack socket. I am using this with a DIY 8 step sequencer (I will make a post about it at some point).

As of power, it has a standard DC power socket for a 9V power supply and an on/off switch.

You can find the .stl files for printing the box on my thingiverse profile.

One might asks, – What can you do with it? – Well, anything you want. It is possible to hook it up to a sequencer, a filter, VCV rack through a jack-usb cable, etc. In all honesty, it is obviously not the nicest sounding musical thing you can imagine, but nevertheless you can have some fun with it, it is a great learning process and relatively easy to build. Here you can see it is hooked up to a sequencer and a tacky old “Behringer Tweakalizer”, recording in Audacity through a laptop.

Here is a 2 minutes sample of some of the sounds this box can make on its own:

Had a wee half an hour run with Red today
Red Style 🔴🔺⭕❤️
Original MZ flag
No spoke Sunday.
Let's go!
"How to mordenize your 30 years old product in the #90s without changing it much " Masterclass - lesson 1. - use the word "electronic" liberally
Loading Comments...
%d bloggers like this: